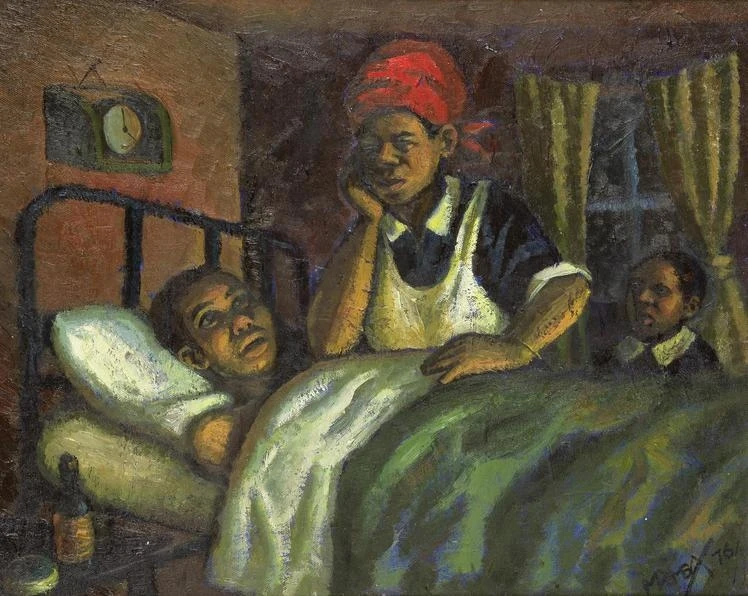 George Pemba is a well-known South African artist known for his bold use of colour, with many of his paintings inspired by his time in the hospital, where he spent much of his time drawing his surroundings, fellow patients, and doctors. Pemba is regarded as a forefather of African social realism, and in 2004 he was posthumously awarded the Order of Ikhamanga for his contributions to art and literature.

Yusuf Grillo is a well-known Nigerian artist and the founding president of the Society of Nigerian Artists. Grillo is regarded as one of Nigeria’s most distinguished academically trained painters; he rose to prominence and international acclaim in the 1960s and 1970s, exhibiting a large collection of his early works. Many of his paintings incorporate elements of his western art training, combining western art techniques with traditional Yoruba sculpture characteristics. His use of blue in natural settings paintings is sometimes reminiscent of adire or resist-dye textiles used in Nigeria.

The auction will coincide with Africa’s premier contemporary art fair, ART X Lagos, where ARTSPLIT will also be hosting a satellite event Art As an Alternative Investment, a seminar series produced in collaboration with Omenka magazine featuring some of the most notable voices in art and business, including Giles Peppiatt, Director of Modern & Contemporary African Art at Bonhams; Ruarc Peffers, Founding Director of Aspire Art Auctions; and Oba Nsugbe, Pump Court Chambers’ Head of Chambers and others, with each panel moderated by Oliver Enwonwu, Editor-in-Chief of Omenka magazine.

The ARTSPLIT app allows users to own fractions of prominent African artworks, also known as “Splits,” and keep or sell them on the app at the end of the Split Auction.” The Splits allow multiple people to co-own a single iconic piece of art, which no other art platform currently does. Users can also participate in a ‘Lease Auction’ on the app to win physical custody of these co-owned artworks for a set period.

ARTSPLIT is an art trading company driven by the shared goal of enhancing the investment status of African art by allowing users to co-own rare and valuable artworks on a platform that guarantees price discovery and market liquidity.

The platform (ARTSPLIT mobile app) allows its users to own fractions, also known as “Splits,” of prominent African artworks on the app and in the “Split Auction” where they can either keep or sell in its secondary market to other users for profit. These “Splits” (fractions) enable multiple individuals to co-own a single iconic piece of art on the platform. Following the Split Auction, users on the app can also bid to win physical custody of these co-owned artwork for a set period via the “Lease Auction.” And this cycle is repeated on the app as far as multiple individuals own splits of that artwork.

What OneHealth, Other Nigerian Startups Do Differently To Access Funding in Africa 

For Startup Launchcode, It Takes A Village For Technology To Thrive